The badly decomposed body of 41-year-old Ricky McCormick was found in a field in St. Charles County, Missouri, on June 30, 1999.  Ricky was an unemployed, high school dropout who suffered from chronic heart and lung problems.  No one had reported Ricky missing and authorities were ultimately unable to determine his exact cause of death.  There were no indications that he had been shot or stabbed.

Investigators were quickly perplexed by the fact that Ricky was found in a cornfield over 15 miles away from his home, as Ricky did not own a vehicle or drive, and public transport was not available in the area.  The area was considered to be “a popular place to dump bodies.”  But how Ricky got in the cornfield would turn out to be only a small part of a larger mystery.

Ricky’s body was also determined to be in a state of advanced decomposition, despite the opinion of medical examiners that he had died on June 27, 1999 (only three days prior).  It’s not impossible that his body would have decomposed rapidly considering the weather conditions of the area at that time; however, it does seems more likely that he was kept in a  warmer environment, like a shed, for a while beforehand.

Most unusual, police found two handwritten notes in Ricky’s pockets which appeared to contain sequences of very succinct, coded messages.  The code consisted of “a jumble of letters and numbers occasionally set off with parentheses.”  Both the FBI’s Cryptanalysis and Racketeering Records Unit (CRRU) and the American Cryptogram Association have been unable to decipher the notes.  Due to a lack of information regarding Ricky and his cause of death, police were unable to definitively conclude that he had been murdered, and the case faded away into obscurity for years.

However, in March 2011, authorities officially listed Ricky McCormick’s death as a murder and the FBI made a plea to public for help in decoding the notes.  The code is still considered to be one of the top unsolved ciphers by CRRU.  Authorities believe that the notes were written within the three days before Ricky’s death and could potentially lead to those responsible for his death. 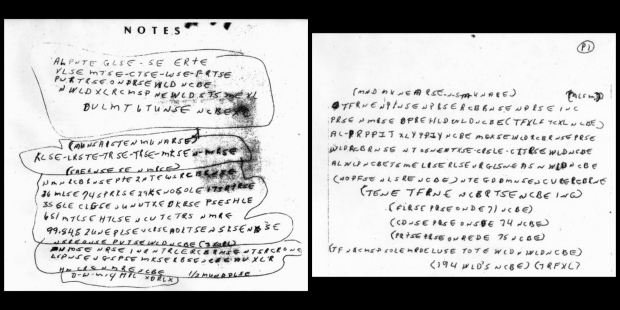 His family strongly doubts that he had the capacity to generate the notes, and his mother has bluntly declared the following:

“The only thing [Ricky] could write was his name. … He didn’t write in no code.”

The suspicious death of Ricky McCormick, and the public dissemination of his unbreakable code, remain complex mysteries with no leads nor answers.  How did Ricky get so far away from his home?  How was his body so badly decomposed within only three days of being deceased?  What do the coded messages mean and who wrote them?  And, most importantly, what happened to Ricky McCormick??

Ricky C. McCormick was born on June 14, 1958.  He was known for “concocting tall tales and his displays of unusual behavior.”  It appears as though, by most accounts, Ricky was not entirely literate, and his own mother characterized him as “retarded.”  Ricky’s aunt described him by relating the following recollection:

“Ricky went to see a psychiatrist, and he said Ricky had a brick wall in his mind. …[The psychiatrist] said Ricky refused to break that wall. He didn’t like the life of living poor and had an active imagination.”

Ricky worked low level jobs usually performing some kind of manual labor, such as floor mopper, dishwasher, and busboy positions, and he preferred to work the night shift.

In 1992, Ricky McCormick was arrested for statutory rape, having fathered two children with a 14-year-old girl.  He ultimately pleaded guilty to the charges and served thirteen months in jail.  Ricky fathered four children over the years.

Before his death, Ricky took at least two trips via bus to Orlando, Florida in 1999.  His girlfriend at the time would later tell police that she believed he went there “to pick up marijuana.”  In fact, it seemed as though Ricky regularly “accepted offers to pick up and deliver packages for money” lending credence to some the theory that he may have been some sort of courier for the notes.  The girlfriend also revealed that Ricky seemed unsettled, or even scared, in the weeks leading up to his death.

Ricky was verified to be alive only five days earlier getting a check-up at the Forest Park Hospital (which was closed in 2011 and is now described as post-apocalyptic) in St. Louis, Missouri.  An employee at a gas station, that Ricky frequented, also claimed to have seen him on the day of his death. 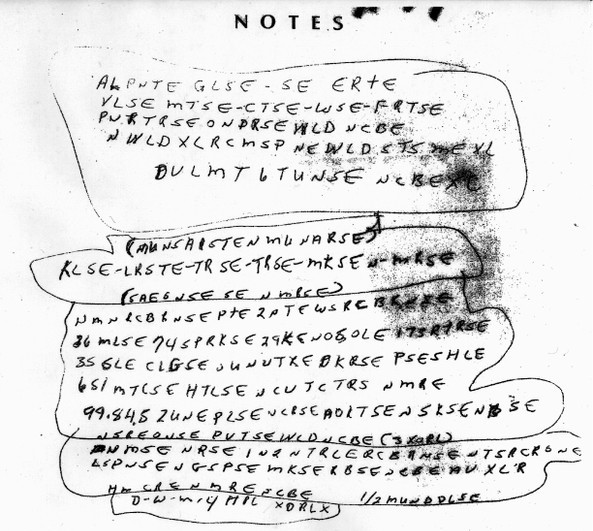 Dan Olsen, chief of the FBI’s CRRU, illustrated the significance of the encoded notes with the following description:

“It doesn’t happen often that we have an unsolved cipher of this length and significance. The characters are not random. There are many E’s, for example, that could be used as a spacer. There are many characteristics that suggest it could be solved, many patterns. The problem is we don’t know why it is not solvable.

…This means something.  We look at a lot of things that are gibberish, arbitrary strikes on a keyboard. This is not that case.“

An Uneducated, or Ill, Man’s Shorthand?

It seems that most cipher experts concur that the code is not random, and some have suggested that it may, instead, be quite sophisticated.  However, the potential identity of the author of the notes remains an item of stark contention.

The most recognizable pattern, which is readily visible throughout Note 1 (see the above photo), is four letters: NCBE.  Another recognizable pattern is the repetition of the letters SE throughout both notes.  As some internet sleuths have commented, considering Ricky’s potential involvement with drug trafficking, it is possible that “this is an uneducated drug dealer’s shorthand. It breaks down who he sells to, how much he sells, a short description of how he knows them, recognizes them, or if he doesn’t know them.”

Suggested meanings of NCBE, if it is indeed a shorthand code, include variations of the following:

The shorthand explanation, in all of the forms suggested and for the purposes suggested, seems almost too sophisticated for the context that Ricky would have most likely been using it in.  For example, if no cash was exchanged and a dealer wants to notate that, why even use shorthand?  Why not just write something simple like no?  Why even notate details like that instead of just keeping a roster of names or initials?  Is it even necessary to keep notes on people where the cash was exchanged successfully?

And if the notes are indeed Ricky’s shorthand, they are essentially undecipherable.  It is impossible to know how his personal shorthand would be affected by factors like his phrasing habits, potential learning/mental disabilities (such as dyslexia), or even speech quirks/impediments.

Some articles have suggested that Ricky was simply ill and paranoid- that though the notes are not exactly gibberish, they are impossible to decode without Ricky, and appear to “show characteristics of someone with bipolar [disorder] or schizophrenia.”

Another intriguing theory is that the notes indicate prescription drug usage and corresponding dates and time.  This would mean that Ricky’s notes served as a medical journal of sorts:

D-W-M-Y M,D,L = Day weekday month year: morning day or latenight These are time designations that are critical to get your meds right with bipolar and are coded for privacy

On Note 1 are lists of manic episodes, as required to diagnose bipolar:

From late september really severe episode on December 1971: No cause before episode

Chronic Depression in September, really severe episode on the start of December in 1974, no cause before episode

However, the medical journal theory has its own set of criticisms as well.  First of all, there is no hard evidence to suggest that Ricky was bipolar or had prescriptions for any of the medicines referenced.

Secondly, some of the translations are a stretch, and the same patterns have different meanings depending on what works in the context.  In this theory, SE simultaneously stands for Serenace, September, and severe.   This is entirely possible, but illustrates how subjective (and therefore unknowable) the code would be if it is in fact some sort of journal.

Or Is the Whole Thing Bigger than Ricky?

Another popular suggestion is that the notes were planted by the killer as a distraction for police investigators.  This suggestion does not take into account the potential complexity of the notes.  It seems like a lot of effort to come up with a complex code as a simple diversion.  Especially, considering local investigators could have easily dismissed the notes as gibberish, or unrelated.

Popular cryptographer, Elonka Dunin, has suggested that Ricky McCormick does not seem a likely author of these notes.  In consideration of his education and background, Elonka argues that it seems most reasonable that Ricky was a courier for the (at least somewhat) sophisticated codes.

Under this theory, the NCBE could have stood for National City Bancshares stock, or something similar and even less recognizable.  Some mystery forum users have speculated that the numbers in the note could correspond to highways or vehicle identification numbers (VINs).  Essentially, there are endless possibilities regarding potential schemes and illegal information which criminals may have opted to encode.  It is not an incredible stretch to believe that they would have paid a, possibly unknowing, courier to transport their messages securely in 1999.

The main criticism of this theory is that the notes were left in Ricky’s pockets.  It is argued that if he were transporting important, coded messages between powerful individuals, than why were they left for police to find.  But this criticism fails to account for the possibility that Ricky was a courier of messages and also, perhaps randomly, killed in between deliveries by someone completely ignorant of the notes.  It is also impossible to know if other, more important notes were taken from Ricky’s pockets.

The notes found on Ricky McCormick may never be successfully decoded for an array of potential reasons.

Exactly how the local investigators recognized the value of the notes, and treated/forwarded them with appropriate attention, is another item of contention.  If Ricky did in fact write the message, it seems unreasonable that investigators were not able to find other samples of his coded writings.  The mystery surrounding Ricky McCormick’s death, and his complex codes, could be more far-reaching than expected.  One internet poster described the situation accordingly:

“It really does seem to me that if the FBI genuinely wanted help from the public brain pool, they would have provided a lot more details. Especially if this case is as cold as the date and investigation’s success suggests.

We are probably sniffing at trails their dogs have run a hundred times. I understand the benefit of fresh eyes, but it helps to at least know what has already explored.

This almost has the makings of a hoax were it not about the mysterious death of a real person.”

Ricky’s notes placed Number 3 in the FBI’s Top 10 list of uncracked coded communications, along with notes by the Zodiac killer and a note from the Tamam Shud mystery.  The messages found in Ricky’s pocket have not been deciphered to this day, even after a massive amount of internet attention.

Dan Olsen has emphasized the the public:

“Even if we found out that he was writing a grocery list or a love letter, we would still want to see how the code is solved. This is a cipher system we know nothing about.”

If you have the solution to Ricky’s coded messages, please post it in the True Noir comment box, but also forward it to the FBI Cryptanalysis and Racketeering Records Unit at the following address.

2 thoughts on “The Strange Death, and Unbreakable Code, of Ricky McCormick”

Thank you for reading True Noir!

The more discussion, the better. 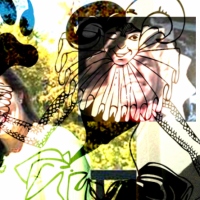 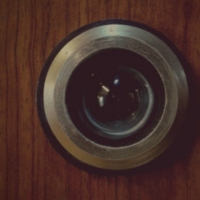 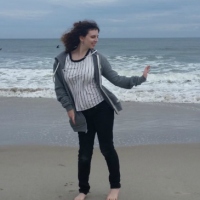